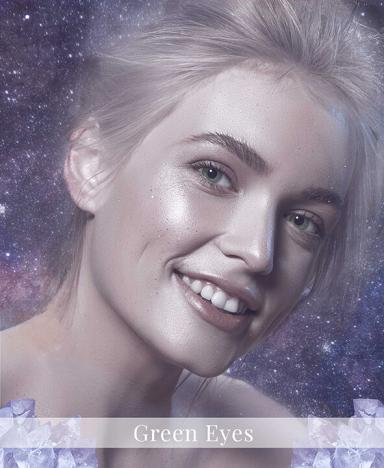 Many people wish to have green eyes because they are considered the rarest of eye color, apart from black. Generally, green eyed people are found in countries such as Pakistan, Afghanistan, parts of Central Asia, Spain, Brazil, and a few areas of Africa. Some people think of green eyes as magical. People with green eyes are also known to have chameleon eyes, the type that often change color.

Eye color depends on our genes, and it is also said to be hereditary. The color of our eyes also gives signs of one’s personality. It has been scientifically proven that almost 16 types of genes are responsible for the color of our eyes.

People with green eyes are known to be extremely passionate people, and because of this, they have very long-lasting relationships in their life. They are noticeably good looking. It's also a well-known fact that green-eyed people can become quickly jealous, or “green with envy”.

They have a sensitive digestive system, which often troubles them while traveling. They have in the past been labeled as being calculative in nature, cunning, and selfish, and because of these traits, it’s difficult to trust them.

Professionally, green-eyed people are born leaders. They are determined people who are extremely sharp, witty, and capable of doing any task assigned to them. In love, they are a bit over demanding, never ready to listen to their partner, and also never one to compromise.

With lots of curiosity in mind, they still manage to be great listeners and orators. People who have green-colored eyes are said to have mystery around them. These people are curious by nature, but undoubtedly intelligent.

According to astrology, people with green-eyes are said to be gentle people. The green color is also considered to be connected with the mixture of the energy of Venus and Neptune. These eyes look beautiful and generally attract people with their magnetic aura.