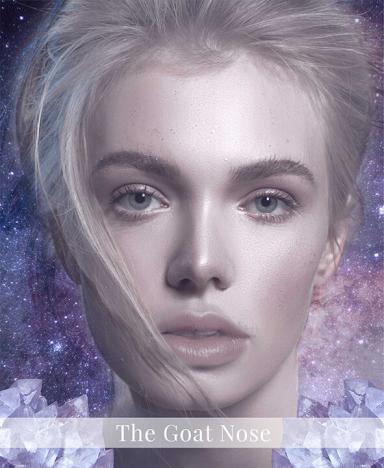 This is a nose with wings and a very long, fleshy and rounded tip/ The nose wings are also rounded and have the appearance of a tube.

People who have this kind of nose are very respectable and highly trusted. They are believed to have a noble character and position in society. They are treated with high regard. They are also very respectable and always revered and considered a unique type that does not get easily swept away by other people’s ideas. They portray a higher degree of elusiveness and obscurity in every way possible.

In one of the most significant ways of analyzing characters based on their nose types, they are believed to be sharp and well-skilled in evading and finding possible ways to any challenges that comes their way. Nothing keeps them on the losing end unless they are not well prepared. However, they lack the insight to what might happen in the future. They do not have the capacity to tell or even predict what their future may be.

More often than not, they are likely to be deceived and conned easier than any other person. They always take things the easy way and do not diversify their minds to include any uncertainties in their lives. Most people tend to take advantage of them at the most unsuspecting times in their lives, and as a result, they end up being victims of circumstances.

They are often perceived to have a very strong and keen perspective and always seem so hard to accept defeat in any of their undertakings. They have a very strong and positive belief and persuasion about whom they are. Supposedly, they do not take things easily on their part, especially when it comes to criticism and critical evaluation.

They do not accept defeat on anything they are bestowed with, and in the long run, they are said to have an untouchable self image. They do not really know themselves, but just keep guessing.

They do possess a great demand on anything that comes their way without clear discrimination and distinction. This is a major challenge, and in most cases, this ends up driving them into doing things that may be against their true self. Nevertheless, they do have some of the talents that are so rare in most people, and for that reason, they are often envied.

They do not have any discriminative approaches to the way they work. They love working while maintaining a private life, and in most cases, they turn down leadership positions since they have adequate and very efficient management skills.

They do not commit themselves to intimate relationships, but if a relationship ends up taking place, they tend to be perfect. Moreover, they are respected by their friends and those that know them.