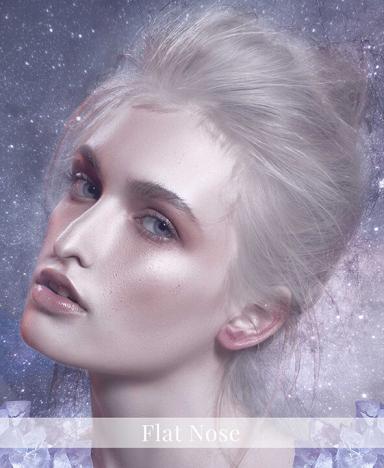 The flat nosed person lacks the nasofrontal angle that is a common feature on noses.

This nose is mostly found on Asian nationalities. Most people that have such a nose are talkative and like to listen to others. Naturally they tend to portray themselves as people who care about their close associates. This gives them an opportunity of being inquisitive.

They love to participate in talks and are a great judge of character. Most of the time, they are in the company of more than two people and never find solace by being alone. This gives them the opportunity to communicate. They never leave anything to chance and are committed to any task given to them.

One of their imminent traits is their nature to get offended quickly. They always want to be treated with trust and if anyone tries to thrust any doubt upon them, they easily fall apart.

These people are gifted with great oratory skills and in most instances are great storytellers and their stories are clear as well as charming. They are best suited to careers in politics and in some instances journalism.

They know how to keep their audience captive and hardly forget, since they have a perfect memory. Some people with such a nose can easily remember history in a chronological order! In terms of love and marriage, they are family focused but if the bearer is male he will put his career before everything in order to provide for his family. If the bearer is female then she will be focused on improving her appearance as well as making many friendships.