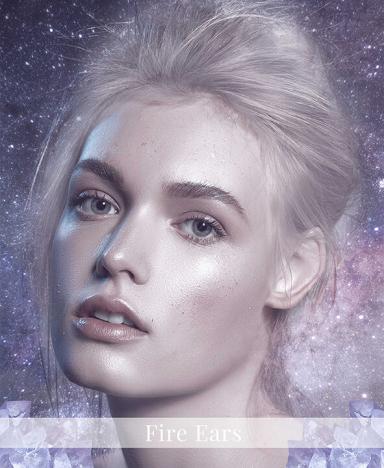 Fire ears are ears which are set high up on the head just like water ears, except in this case the lobes don’t really make an appearance and these ears are slightly pointed at the top, which makes them look similar to a flicker of flame lit up on a candle’s wick.

These ears tend to stand out on the top of the head and definitely make themselves known. It is easy to note people with these kinds of ears because the ear is hard to hide with hair. Often, these kinds of people will be proud of their ears or ear type though and unknowingly show the off. This could be because of their distinctive nature or because they spent their childhood trying to hide them that they came around and learned to accessorize. Often people with kind of ear will have earrings to highlight their ears or have longer hair that they naturally brush behind their ear.

Those with Fire Ears tend to be unfortunately rather stubborn in life as a result of their combustive personalities. For them, life is a big game that needs to be won and they need to be the winner always. They are highly competitive, highly egotistical, short tempered and often alienate themselves and others by bringing out the worst in people.

Individuals with Fire ears tend to just not really like people in general because for them dealing with anything emotional or anyone else’s problem is a real waste of time and they tend to be very busy people attempting to acquire success or betterment in one way or another.

These kinds of personalities tend to be so stubborn that no one really wants to be around them, unless they are other fire eared people who enjoy the drama and the competition. Fire eared individuals can often be found pursuing careers which involve a lot of arguing, such as in Law or in public office. They tend to get angry very quickly when something isn’t going their way and they almost never apologize when they are wrong because it is just really difficult for them to believe that they are wrong.

These individuals tend to be the stress case in the family, in which they are always the one responsible for organizing all of the bills and the chores and things of this nature primarily because they can’t let the control go for very long. Sometimes, these combustive personalities can be rather abusive, both on a physical and/or emotional level. Usually this kind of rage comes from within and from not having a lot of appreciation growing up which causes them to have fear of being out of control as well as feeling a lack of self-confidence.

However, despite their strong personalities, these individuals tend to be a force to be reckoned with in the business world. They will fight and claw their way all the way to the top and become rather successful. However as a result of all of the tension that they hold within them every day, they tend to live short lives. Therefore if you are a fire eared person, try to relax, find physical outlets that will get some of the tension and stress out, you will be grateful that you did!