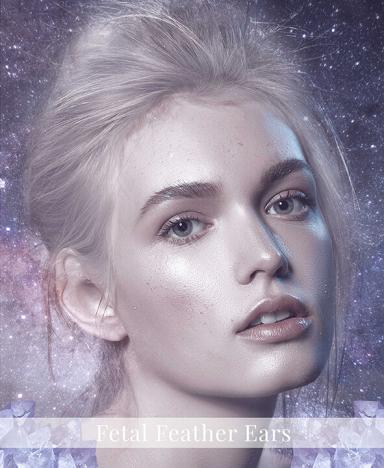 Ever wonder why it is that a person might have an ear that folds inward and what that is supposed to mean?

Well, Fetal Arrow Ears are specific to this kind of ear shape. In addition, a person with Fetal Arrow ears tends to have an upper ridge which adds that folding appearance, which is, ironically given to have the appearance of a fetus. As troubling as it is to have such ears, it is good to be able to note that if you have these ears that you are going to be okay in the long run but that life is going to be bringing you some excess challenges which you must be prepared to face.

Often sometimes, unfortunately, a person with Fetal Arrow Ears has had to endure a lot of trauma in their childhood. This could range from any number of abuses or just an accident that affects their personality for the long term. For this reason, getting to know a person with Fetal Arrow Ears can be relatively challenging as they are pretty much always concerned or prepared for the interaction to bring them some kind of bad luck. Never fear, however, if you are the friend of a Fetal Arrow Eared person you can trust that they will do what they can to continue to keep you in their life, but it is hard for them sometimes to understand why it is that you remain. They are super self-conscious in nature which is usually what causes them to push people away, but if you are aware in advance that that is what they do then you can counter it by loving them unconditionally.

Inherent in the Fetal Arrow Ears comes an unfortunate set of health concerns which are often hereditary. These can be issues of hearth health or even stunted emotional behaviors, but it is something that follows them throughout their life, therefore it is often challenging for them to see the happy or productive in a situation because they are so consumed with health concerns. In addition these are the types of people who tend to have troubles making decisions and so the success which they are capable of achieving in life is somewhat stunted as a result. They just don’t feel like they will ever be happy and so that tends to follow them throughout their life making it pretty impossible to be happy.

Those with Fetal Arrow Ears also feel as though others will always be stronger/better/faster than them in life and that causes them to experience a significant level of jealousy which alienates themselves from others causing difficulties in creating substantial relationships and friendships in life.