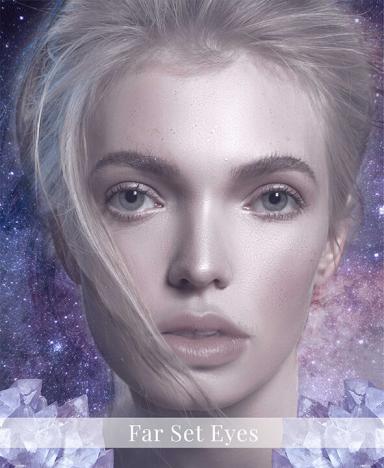 People with far set eyes are very much the opposite of the close set eyed person.

They can have extreme openness and be creative, whimsical, daring, loud, and overly trusting. These people are usually very easy to get to know, however they can be just as difficult to become truly close to as their close eyed counterparts.

Their eyes are going to be set farther apart than the average person with the insides and the outside of the eyes being proportionate. Do not confuse far set eyed people with people with large eyes that make it appear that their eyes take up a good deal of their face. Rather, to be sure you are dealing with a far eyed person then you want to look at the center of the eye, closest to the nose. It is here that you will note that it appears that they have wider nose bridge or more fleshiness in the middle of their face.

It is not always a bad thing having far set eyes. Some cultures have this trait more prominently as well. Like most eye shapes, you do not want to generalize a whole race of people being a certain way – rather focus on the shape and distant based on what would be the norm for them. When you see someone from a background that has naturally farther apart eyes such as some African, Asian, and Native Alaskan cultures, consider how their eyes are placed in relationship to what you would expect normally.

This people with far set eyes are constantly on the move. They have little concern with wealth and often will be quite giving with what money that they have. Sometimes in fact they will appear irresponsible in their finances because they have tough time saving or hoarding for the future.

They want to be free and are plagued with wanderlust. They are the adventurers of the world and the kind of people that pave the way into new areas be it technology, nature, education, or the like. Whatever field that they are naturally drawn to, their ability to think outside the box can give them praise as innovators.

Being that they are naturally very open though, they see many possibilities in the world. They have a hard time focusing or staying on task and will often begin a project and then hand it off to someone else. They work well in group environments because they can have a stellar idea or plan but have no problem with sharing the spotlight.

Often they will consider all people special and important and are happy to give those around them their praise or reward. They tend to understand other people very well and can be loyal to a fault. Because they do not usually act on their anger as it is seen as counter-productive to their understanding ways they can be easily taken advantage of.

People will often see these people as being dim-witted because they are so easy going. Their ‘happy go lucky’ or lighthearted nature means that they are simply accepting of others and they don’t see the need to push others. They are very in tune with other’s emotions as well and will mirror people.

If they are in an upsetting environment they will also be the peace keepers.  When they realize that they are dealing with stubborn people that will not change often rather than fighting though, they will withdraw and be happy going off to do something else.

This kind of nature can make them great lovers but bad partners in life. They want to please their partners and therefor sexually they are often well-versed and alluring. They understand the needs of others and will work hard to make an impression.

They do not mind giving and can be very loving and caring for another. However, if they feel that their actions are not appreciated they will tend to begin to give their attentions elsewhere. Also, since these kinds of people are not concerned with people you cannot buy the heart of a far set eyed person. You have to show them and tell them your feelings. They do not need to be lavished but they do need to feel that their efforts are recognized, even if you did not ask for their help.