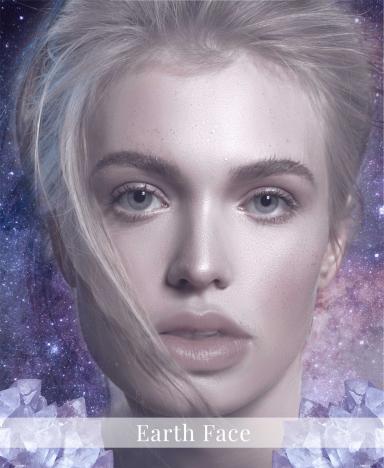 The faces of the element of earth are square in shape, often full cheeks and plump lips.

Their chin and jawline are also fleshy, signifying the grounded personalities. Not too exuberant, but willing to be excited, the earth faced are known to be doers. Always taking a vested interest in all they experience.

If You Have These Features, Chances Are That Your Element is EARTH

When you first meet a person of earth, you’ll notice that their longish face takes on either the shape of an oval or a circle. In each of these cases, you should be able to identify the energy through their facial features because unlike traditional face shapes, the prominent size is slightly longer.

The face itself may be similar to a rectangle or square, but will be stretched out or exaggerated. Often these heads rest upon thin or slender athletic frames.

Because they so often find themselves in a position of power, not because of luck but because of sure will, by the time earth people are in their mid-20s, they have a strong sense of self. Adulthood is usually an easy transition and they will often start making their own way in the world as soon as they can.

This experience of working their way up and earning what they receive gives them a direct outlook. The expression of earth is habitually worn through concentration, determination and discipline.

They spend a lot of time thinking, because they are interested in all of the possibilities. They will first consider possibilities from their own viewpoint, but then need to know the truth and so put themselves out in the world to test their own theories. This makes them driven individuals, often raising the ranks within either their company, profession or even the military.

Earth people tend to be intense, which obviously reflects in their face. Their minds are quizzical, intelligent and quick, which should result in forehead wrinkles or crow’s feet from all of that concentration but it is often not the case.

It is said that planetary grounding energy is constantly moving in an upward motion and is a symbol for activity and growth. The energy of the element itself will usually provide positive effects on the skin, encouraging elasticity and rejuvenation.

For this reason, those that are blessed with the element of earth are known for their baby soft skin, clear of blemishes while maintaining a youthful appearance for many years. Their intensity is thus, not transmitted through the skin but through the facial features themselves including bone structure and body hair.

Take their eyebrows for example, while they may be bushy as often as they are sparse, almost all earth people will have a similar straight shape. They lack a natural arch and in some cases can create a brooding look, especially in men.

They often rest upon a long and in many cases, sloping ridge of the forehead. Famous earth elemental ladies, Princess Kate and Kate WInslet both have the trademark barely curved eyebrow. Elvis Presley also has the same contour to his brows.