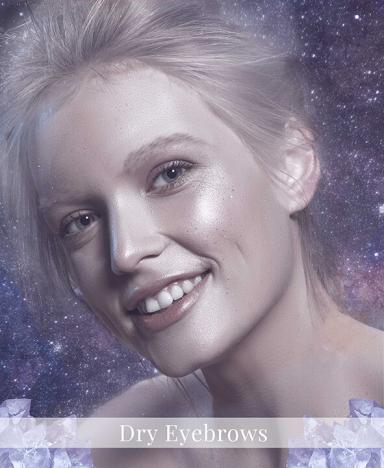 People are said to have dry eyebrows if the eyebrow hairs appear to be short and sparse.

At times, these people are slightly over-analytical; therefore, they are highly cautious. They may be full of worry and lack patience, and these two traits make for a very troublesome person. Their main weakness is their inability to see things in a much wider scope; this is due to their short-term focus on matters without thinking of the future.

People with dry eyebrows are a high risk of attack from anemia and have serious problems with their respiratory system.

The dry eyebrow person normally makes great career in engineering they like to build something and usually base their career and that the bearer of dry eyebrows takes on challenges. They have often been told - they are a law to themselves!

They dislike taking any orders or following any rules. They cultivate themselves into a leadership positions in the career world. They are generally fulfilled in careers which involve solving a problem. They are ambitious and work hard to get ahead in life. Though they are quite generous they also watch the money carefully.

The bearer of dry eyebrows can come across as being warm and appreciative. There are quite independent but they do like to be looked after if they have a family. They are a good organiser but have problems executing plans. There's lots of plans in their minds and they find a very hard more difficult to action them and to move forward in life. If the eyebrows are slightly fuzzier in nature this indicate some adversities in the latter part of life - success is normally strived.

They can become a leader but it will be in the latter stages of life. They are apt at learning all about the law and how different people respond to different actions. They can succeed in business and have a specific strength for journalism. They got the ambition to make the most happening their life, especially if the latter part of the eyebrow was slightly arched.