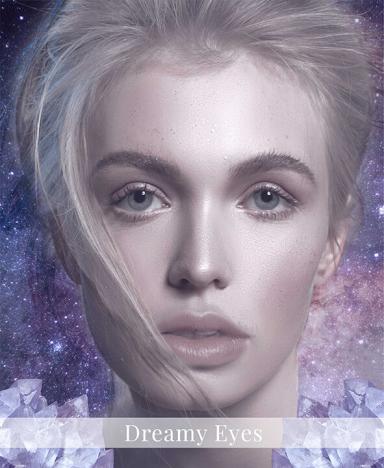 Dreamy eyes, or eyes of the dreamer, are eyes that are characterized with a mysterious look.

Sometimes the eyelid and the skin around the eyes may appear puffy, like a person who just woke up or had been crying. These eyes can give the appearance of a sensitive person, but the actions of the person will not be matching to this misconception.

In fact, dreamy eyed people are often solid realists. They see the world as a concrete place and while they do have a sensitive nature and often have psychic abilities, they realize the truths behind the world and as they grow older they also tend to become hard or cynical as they can see the truth to people and their motivations.

They are also very in tune with nature and while this eye type at one point in history were calm and relaxed people, they tend to pick up on the damage and destruction of nature around them and this is reflected in their actions. They do not have a tolerance for most people.

Because of their nature, they tend to close themselves off from people around them. While they may seem mysterious, they really just want to be left alone. In truth, they are perfectly happy to go back to their own little worlds of dreams and fantasy.

When they are appearing aloof, while some may think they are playing hard to get (especially in relationships) it’s really a simple matter of not being bothered. It takes a great effort to get them out of their shell and to be yanked from their lovely and creative daydreams.

One avenue to bring them back to reality is sex. They are very feisty creatures behind closed doors and often can be known for ‘getting around’. This is not because they fear commitment. Actually, dreamy eyed people will do well in relationships, if you can catch their attention long enough.

Sexually, they can be creative and free. This leads them to often remain unattached so that they can fulfill their large sexual appetites. If they are in an actual relationship though, once they settle down, they usually do become loyal companions.

Day to day life can be monotonous to the dreamy eyed person. They find a lack of interest in mundane work and since it can take a lot to get their attention they usually wander around from on job to the next and find that they don’t really want to do much of anything unless it is on their accord. Some end up being quite successful in areas of humanitarian efforts, teaching, or this sort of thing. Others will find a knack for creative avenues such as the arts (especially for those that are fire or water based astrologically).

Like any relationship, once they find a calling though, they do tend to remain loyal to it, doing well at school or any studying that goes into furthering their career.  These people are solidly planted on earth even if their head is in the clouds more often than not!