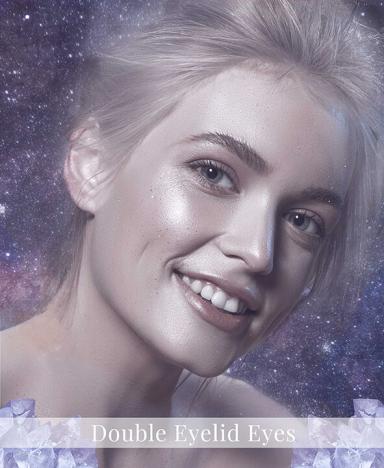 Double eyelids are different from droopy eyelids as they are more taught and tight and rather than giving a lazy eye or disheveled appearance they add focus to the eye. You will be able to tell people like this when you look at them as they will usually have discoloration of the main eyelid as the second eyelid skin portion will rub against the bottom. This gives the appearance of eye shadow even if they do not have any on. It is not a bad look but it can make a person’s face appear older than it truly is.

With double eyelids people will often be mistaken as being older and therefore it is commonly misconceived that the person is not the age they are. This lends people to think that a person is older and thus treat them older. The double eyelid person will usually use this to their advantage and even in their teens and twenties will develop an over abundant sense of confidence as they are more likely to get away with things that their peers would not. Perhaps it is from this confidence or simply their nature that double eyelid people tend to be self-important types – even to the point of being pompous or conceited at times. They come off as being know it all’s as they are well-read and smart by nature. Double eyelid people have  a tendency to have high IQs or street sense and have a great knack for practical applications of their knowledge.

Double eyelid people tend to have large and bombastic personalities. Many of them are feisty and fiery in nature. They will never be confused with the wallflowers in the room. While they are not always the life of the party, they certainly lend entertainment values to a social setting. Double eyelid people tend to make friends easily but can find that they are lacking in close friends. Their fickle personalities makes it hard for them to develop deep and long-lasting relationships with others because they can become interested and then disinterested in people, social circles, hobbies, and interests at the drop of a hat.

The fickle nature of the double eyelid person makes them restless. They find staying at on job for a long time difficult unless there are varied responsibilities. These people will loathe monotony and routine in both their social lives and in the work place. This can also lend them to be intellectual types as they will gain much information from one area and then move on – picking up a bit of this and that from here and there. They are very good at trivia and while they may not be in depth learners on topics they will know enough that will make them appear smart or educated.

Double eyelid people are highly driven by their instincts and emotions which makes them sort of unpredictable. You may never quite know where you stand with these people. However, they are also honest to a point. If you ask them their opinion, they will give it without pause or concern of feelings. Hurting someone else’s feelings is not their goal but they feel very strongly about being honest. Unless they work hard on developing tact they can come off as rude or distasteful because they will say whatever pops out of their mind and undoubtedly those with sensitive natures are going to take offense. This can be a great trait when you want a truthful or completely honest answer… just don’t expect it to be sugar-coated!