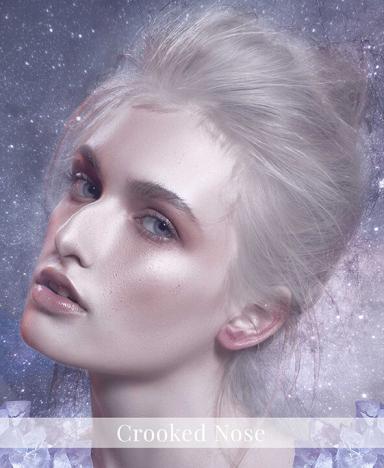 This nose type is characterized by a bump on the nose bridge.

Some attributes of face reading are predominately masculine, on the surface a crooked nose can be associated with impetuosity. When this feature is seen in a female subject  this means that the female will have a range of qualities, such as faithfulness, honesty modesty and love.

This trait is more apparent if the face is seen from the side. Commonly, a crooked nose features two bumps and a general bony outfit. The positive attributes, the person can be credited for include sincerity and pride in daily existence. People with this nose are thought to be fully focused when achieving a goal.

They will aim to get what they want and conquer whatever circumstance or opportunity that presents itself along the way. Because of their personal gain, it is believed that they will always succeed - no matter what the consequences.

A crooked nose that points to one side of the face means the subject has a "can do" type of attitude. This is because of the general circumstances that underlie their growth and development in their childhood. It is believed that a bearer of a crooked nose tends to at times be cunning because they are believed to grow up in a life full of suffering and obstacles. These people do not just acquire the attributes by chance but because of having to survive a difficult childhood.

They are concerned about failing, which means they hardly enjoy the success of their hard labor. It is believed that these people must work hard to gain wealth and success. This carries the risk in losing insight into what is important in life.

There is no reward that can come their way without them having to sacrifice their time, material possession and even wealth. They are always defensive by nature. Some bearers will put up walls to shield themselves in any confrontation.

Taking advantage of their friends or anybody close to them may happen at times. The most prevalent attribute that is associated with this person is that they are a true survivor. It is believed that they lie in the category of people who can face life by hook or crook and never get worried about the future. They face everything as it comes, generally living in the present

They are believed to work best in an environment of hustle, stress and hard labor. They can easily achieve success by working through painful encounters and scenarios. If they are presented with easy and straight forward techniques to achieve their goals they tend to be non performers. Once the bearer of a crooked nose becomes a parent, they begin to soften and start to enjoy life more.