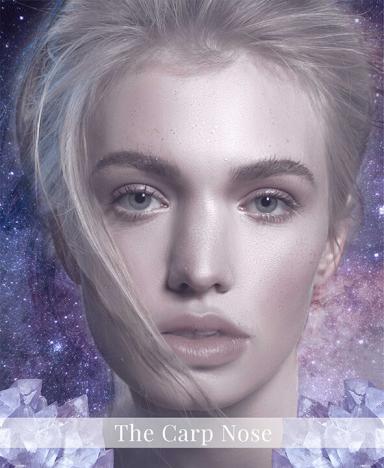 This nose type is believed to have acquired its name from the way it looks, just like a carp.

That is when it is looked at from the sides. The carp nose has a small mountain root and the tip is deeply downward sloping. The nose is believed not to have a fleshy look at all.

The subjects are usually so funny and humorous. They are always imagining things that are beyond their reach, rather than being realistic. They do not have the capacity to formulate and even take care of their ideas in an ideal manner.

Their minds seem to suffer from the syndrome of fantasizing and daydreaming about things that cannot be achieved in the real world. This is a result of having wishful thinking and always envying other people’s achievements. They do not set real goals in their life, and in most instances, they do not have the curiosity to adventure and discover new ideas.

Carp-nosed individuals do not have the power or will to reach to greater heights of exellence and prosperity. Their lives are full of hustling and moving up and down while trying to achieve their goals. However, they do not have the go through any formulae into accomplishing that.

As a result, they end up achieving little or nothing out of what they pursue in life. They are believed to be akin of personality that cannot be trusted to  care and manage other people’s property.

Sometimes, they keep moving through life without making any significant changes. They have low self-esteem and do not engage in counterarguments on decisive techniques to defend themselves. They are easily discouraged, and this keeps them shifting their eyes from one thing to the other, thinking that everything is easily achievable.

Whenever they undertake anything, they do not have the heart that they will fail. What makes them persistent is the attribute of optimism which is short lived, though strongly willed. Life does not seem to be in their favor, and as a way of realizing their dreams, they keep talking more while doing less.

These people are believed to be in the category that loves having others make decisions on their behalf and give them directions on how to do things. They cannot work to achieve things if they are to do them alone.

On the other hand, they can work for other people under directives, and this ends up making them successful. However, they never learn from their mistakes, and in the long run, they end up being unkind to themselves and other people.

They love living a life that is stressful and that makes them able to lean on others for help. They are often lonely and have few friends during their lifetime.