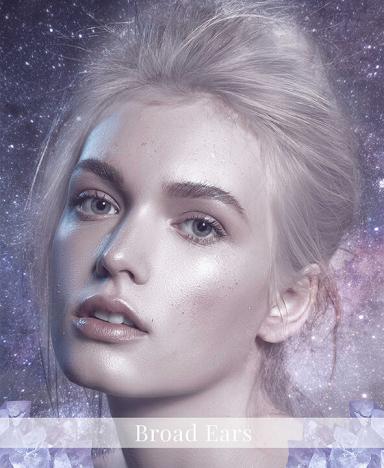 A person with Broad ears is depicted by ears which are thicker or even brawny in appearance.

There are those who even say that the ears are so broad that they come close to touching the shoulders, so this gives you a general idea of what it might look like to be/run into a person with broader set ears. Their ears will be so low on their face that it would appear uncomfortable or even be uncomfortable for the person who has them. But generally speaking this is really just referring to a person who is of a more rare breed who stretches above and beyond what is asked of them.

You can tell their ears are broad as well because you will notice that perhaps the length of the ear is longer than it looks like it should be. Some ears even begin all the way up by the eyebrows themselves and then go past even the tip of the nose by sometimes more than an inch. These kinds of individuals are relatively rare, but when you run into them (or if you are one) they are a rare kind of personality that should not be taken for granted.

The ears themselves on a person with Broad Ears can sometimes appear to be flopsy or even wide and pillow-like. Individuals who have these kinds of ears tend to be wiser beyond their years and very smart. They tend to know things that a person would not generally know and that is because for some reason these individuals enjoy learning about things which are different from the rest of what society would stereotypically learn.

The random mating habits of bats in South America or Sloths in Africa are the kinds of random bits of information that a person with Broad Ears would appreciate learning and then very much appreciate sharing. Their intellect is cutting and their nature is kind over all. It would not be surpr9ising to realize that the person with Broad Ears is over the head of most people they will run into in their life. They will constantly have to struggle with defining their terms, or learning how to communicate with those who are not on the same level as them. But they also love people, and are therefore willing to work hard in order to keep the connection with others, even if those closest to them never really truly understand them on a deep or integral level.

Because of the broadness of their ears, they are also to be respected and taken seriously when they have something important to say. This is often because those with Broad Ears tend to consider all varying scenarios of a troublesome moment and will, more often than not, have the right answers which should be depended on by others. If you are a person with Broad Ears, learning how to trust your intuition enough to share it with others is going to be a very beneficial aspect of your life which must be fine-tuned.

If you know or love a person with Broad Ears, it is extremely important that you learn to trust all that their intellect has to offer as this will more than likely greatly improve your life on the whole. Broad eared individuals tend to gather much wealth in their life time as a result of putting money intelligently into investments which bring them joy, as a result they are good to learn from when it comes to putting money in intelligent places and have a lot to teach those who are of the more spontaneous bend.