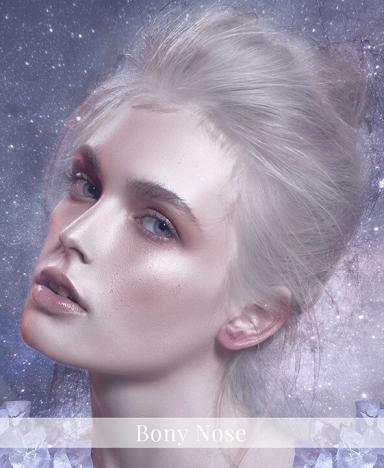 A bony nose lacks the plumpness and fleshiness of other nose shapes.

The bone of this nose protrudes out with little flesh. People who hold this nose are clever, but have a hidden  ruthless side. They are believed to be arrogant, and in most instances, come across as a person who is difficult to please.

On a positive note, people with a bony nose have a large heart and will be committed to family life. In a work situation, they hardly consider the feelings of other people, focusing more on trying to achieve and get a promotion. Normally, they undertake what they think best suits them.

Other people’s motives play a great role in determining their eventual perspective about the trust that other people have put in them. They hardly trust other people to carry out the work, and are seen as a workaholic in some cases.

Their greatest weakness results from the tendency of having too much mistrust. They are believed to work best in environments that are busy, and dislike close monitoring, supervision and close examination. In some cases, these people are the ones who are commonly found participating in strikes or employment law.

These people are believed to be self-centered and always think about their interests first before any other person. Their joy is never found by engaging in relationships.

They struggle to communicate their emotions. As a result, they end up hurting those that trust them since there is the common belief that they cause frustrations and disappointments in their relationships.

Because of such nature, they eventually meet people who have similar attributes and those that actually reciprocate in the same treatment. It is usual for those who have a bony nose to have unsuccessful and troubled marriages.