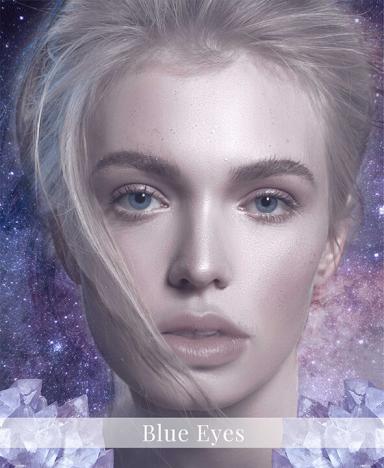 Blue eyes are the second most common eye color in the world.

In humans, eye colors varies from the most commonly found (brown) to the rarest (black). Eye color basically is made from our genes, and it is also said to be hereditary. It has been scientifically proven that almost 16 types of different genes are responsible for the color of our eyes.

Blue eyes are thought to be the loveliest of all eye color, and people with blue eyes are considered to be hansom. They possess a charming personality, and are extremely emotional, and at times, tend to be highly demanding in life.

Blue eyes are found commonly in people from Northern and Southern Europe. People bom with blue eyes are fast to throw themselves into social situations which can maximize their chances of bringing in financial security as well as potential partners.

Bearers are considered the most charming of all eye color but they must learn to love themselves. They need to understand who they really are and how to overcome life’s troubles. They are seen to be rather artistic, innovative inventors, and highly sensitive to nature and beauty. People with blue eyes are commonly known as blonde people. They have a not-so-smooth complexion, thin eyebrows, and facial hair.

While you do have a sensitive nature you normally find it difficult to read other people. Your eye size indicated that you will often have psychic abilities. You will realize the truth behind the world and as you grow older you tend to become hard or cynical as they can see the truth behind people and their motivations.

They are also very in tune with nature and while this eye type at one point in history were calm and relaxed people, they tend to pick up on the damage and destruction of nature around them and this is reflected in their actions. They do not have a tolerance for most people. Because of their nature, they tend to close themselves off from people around them. While they may seem mysterious, they really just want to be left alone. In truth, they are perfectly happy to go back to their own little worlds of dreams and fantasy. When they are appearing aloof, while some may think they are playing hard to get (especially in relationships) it’s really a simple matter of not being bothered.

It takes a great effort to get them out of their shell and to be yanked from their lovely and creative daydreams. One avenue to bring them back to reality is sex. They are very feisty creatures behind closed doors and often can be known for ‘getting around’. This is not because they fear commitment. Actually, dreamy eyed people will do well in relationships, if you can catch their attention long enough. Sexually, they can be creative and free. This leads them to often remain unattached so that they can fulfill their large sexual appetites. If they are in an actual relationship though, once they settle down, they usually do become loyal companions.

Blue eyes, are said to represent the sweetness in one. People born with blue eyes are talkative, which means when you are in their company, you never feel alone.  They are supposed to be gifted with the power of telling the future. They have been known to predict future events, like Nostradamus. Blue-eyed people experience various mood swings - they are unpredictable. People with blue eyes have been found to be strategy makers.

They are great athletes in sports such as golf, which requires strategic planning and time management. They are extremely good observers and well-informed about what is happening around them. At times, they are prodigious visionaries who sometimes fall into a dream world.

Romantic at heart they try to focus on finding their true love. At times oversensitive, they are easily offended and take things to heart which can lead to depression. In the same way, they can also show detestation towards a person if he or she falls into their “hate list”.