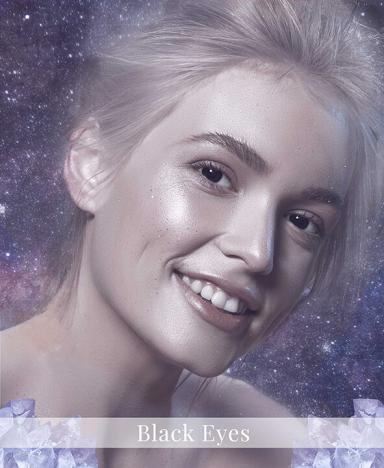 Black is said to be the rarest of all eye colors in humans.

Some say that the Eyes are the windows of one’s soul. Eye colors vary from the most commonly found (brown) to the rarest (black). Eye color is dependent on our genes, and it is also said to be hereditary. The color of our eyes can be a hidden sign to the window of our soul.

It can also help explain one’s personality and what we are capable of in life. It has been scientifically proven that almost sixteen types of genes are responsible for the color of our eyes. Eye color which is black is normally a mixture of brown and amber.

Commonly, it is said that even though it seems people have black eyes, their eye color is an intense dark brown that appears to be black in color. At the same time, it's has also been argued that black colored eyes are so rare that their existence is a myth. So if this eye color does exist, it is rare. In stories and other fictional books, black-eyed people have been described as vampires, being indulged in witchcraft, having mysteries around them.

People who have black colored eyes hold traits of being trustworthy, sincere, and responsible. This means one can share confidential information without the fear of getting it passed on to other people.

Until age of twenty, they can appear shy or intensive. As they climb into adulthood, however, that gradually recedes. They hold an expanding requirement for acknowledgement in life,  and also the need to expand their capabilities through study, education or travel.

After age forty-eight there's another turning level once the emphasis will be on financial and also emotional security.

No matter what age they are, you shall never find them talking about others negatively – only in exceptional circumstances! They are famous for their strong inclination towards spiritual activities. Sometimes these people are also known to have psychic powers and hold sophistication in life. If both eyes are black this is found on short tempered people, and when they are angry, it’s difficult for people around them to communicate with them.

These people are often labeled as secretive people. They are extremely possessive and passionate, with much liveliness in them. They are friendly, believing in the famous saying, “A friend in need is a friend indeed.” This person is filled with positivity and are constantly helping others improve their life. These black-eyed people are also optimistic. They are efficient in proving their abilities to others. Whatever these people do, they do it with full confidence and perfection.