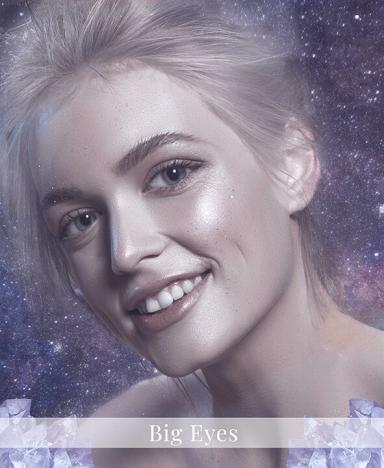 Big eyes, also known as large eyes, have a tendency to open up a person’s face and often give the feeling of warmth or passion from this person while still lending a feeling of wonder or innocence.

When you see a person with big eyes, it is easy to notice them first and feel like you can fall into them. These eye types are often a highly noted feature and in most cases, considered a good feature – especially on women.

The reason that people appear to be so attractive when they have big eyes is because the eyes are the main focus when you speak to someone. It is easy to get caught up or distracted by a person’s eyes and when a big eye person bats their lashes at you, if you are like many, you will get flustered and want to please them. Many cultures have stories about monsters with big eyes that are actually women. These women often would copulate with men or eat children.

It is a common myth because of this that women with big eyes cannot be trusted. This is not really the case. Of course, people with big eyes are not secret monsters and they are innately bad people. They can be threatening to people, especially those that are insecure in their own right. It is not usually the issue of the big eyed person that causes a problem but rather, the temptation they create by engaging people around them.

Big eyes are often a feature of a face that is attached to a person who is larger than life. These people can acclimate to new situations and also do well in social situations as they tend to be extroverted, humorous, and able to captivate an audience.

The knowing personality of a person with big eyes makes it easy to talk to these people and after some time with them you may find that you are easily telling them your life story. If the person is with a big mouth too though, be careful as they may be captivating but also want to say their peace as well.

It may be hard for a person with big eyes to be taken seriously in a studious manner. Their eyes are often flirtatious and give them a light-hearted appearance but in truth their nature is usually the opposite. While they are friendly and outgoing they also work as hard as they play.

Big eyed people tend to be very driven to meet their goals and seek new challenges in their lives. This combined with the way in which they can be taken as being flirtatious, often leads them into troubles with relationships. They have a low tolerance for jealousy or combative behavior and will not tolerate direct rudeness or someone talking down to them. If you find that you are attracted to big eyes on a person, be forewarned that you can be up for quite a challenge as they are usually quite appealing to the opposite (or same) sex.