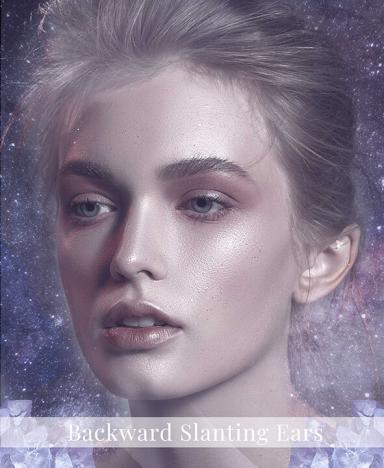 The opposite of forward slanting ears are known as Backward Slanting Ears and this usually describes as the name sounds, someone who is very relaxed and mild in personality.

They tend to be the kind of person that would be considered cool or exciting and didn’t have a lot of dramatic issues growing up. Everything for them is just easy and relaxing and so they tend to be nice to be around. Unless you are the dramatic type and then they can be rather infuriating if you are trying to get a dramatic response from them. Often times the general response that a person with Backward Slanting Ears would say would revolve around not really caring or not wanting to get involved in anything which they haven’t made out to be a priority in and of themselves.

This can often symbolize someone who has a general lackluster for life and doesn’t really have any goals or ideals, but they tend to find that that is just fine for them, they are in no hurry. You will find these individuals finding success in later life as a result of really not feeling the inclination to work very hard up until that point if at all.

But they do tend to be nice to talk to when it comes to existential quandaries, because, as a result of not having a lot of drive, they tend to focus on items of Universal importance, which makes them philosophers, wanderers, adventurers, sloths. Depending on the kind of person that they are. Off the top they appear to be somewhat shallow but when you get to know them better they do tend to have a refreshing sense of humor which many people can identify and connect to.

They automatically do not like to participate in any kind of conflict, and will avoid it at all costs. Therefore if you are really trying to get their attention, it is best not to go the dramatic route or even the direct conflict kind of way. You just have to kind of wait for them to come around.

If you are a person who has backward slanting ears, then you already know that conflict resolution is not your strongest point and it would do you good to practice a little bit more involvement in the human race and its progress. But the best thing to do when running into a person with Backward Slanting Ears is to just accept them for who they are and learn to enjoy the kinds of beautiful and intellectual, albeit relaxed and sometimes superficial discussions and this will allow you to find freedom in communicating and loving on them.

They tend to put things off for a really long time as well so it’s not good to try to press them to any kind of real schedule. This can be difficult for some to accept, especially if you have a more Virgonian kind of perspective on life, but it is also a really great lesson to slow down and relax and not always be so organized.