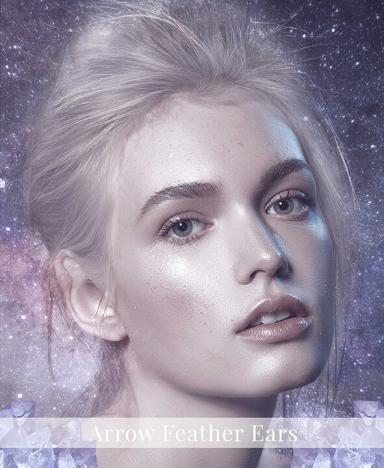 When a person is known to have feathers which are shaped like Arrows, or Arrow Feather Ears, this describes ears which are pointed at the tip or end of the primary upper ridge and rise up to the point of the face which is above the eyebrows.

This particular shape is commonly seen on elves or cartoon fantasy creatures, thusly giving the person who has these ears a more fantastical appearance overall. In this, unlike the Chess Piece Ears, there is no ‘pearl’ on the inside of the ear but tend to have more of a square like shape which houses the canal in a comfortable and aesthetically pleasing kind of way. These ears in general tend to have the appearance of being somewhat thin or frail and the point is relatively prominent.

Physically a person with Arrow Feather Ears is very light in complexion, regardless of race; their skin is soft and allows for some almost translucent properties to shine through. They tend to be very thin, even wispy to some and are therefore not really very strong in general. Their limbs tend to be very ‘light’ looking, almost to the same extent that the wings of a bird are light and airy. The bottom edge of the ear itself curves to a point which resembles that of an arrow, thus giving it the name.

The personalities of those individuals with Arrow Feather Ears tend to have that airy appeal. Their voices can be soft, gentle, under spoken and hard to hear. They are also the type who is very creative and inspired, but you would never know because they will likely never mention it.

The appeal around those with Arrow Feather Ears revolves around their ability to seem almost mysterious just by existing. Therefore despite their best attempts to the contrary, they tend to attract a lot of attention when they are around. The attention is not always good and as children, their grace is often perceived as weakness so they can be somewhat susceptible to bullying. When they grow however, they come more into themselves and learn to hone in on their artistic abilities and while they may not have huge financial success, will be successful enough to perpetuate their hobbies and love of life.

Since these individuals tend to be very sensitive, they focus their attention on caring for others very much, especially when there is a perceived need. This allows them to make friendships with some that others might not see the benefits of befriending. True to the core, Arrow Feather Eared individuals are beautiful souls which should be treated with kind respect, but if you prefer to have someone who is very successful, outspoken or even outrageous, these are not the right people for you. To befriend these character types it is important to be gentle and to understand that it is not necessary to fight, everyone can be met in the middle.

This is not to say that they don’t share in their own kind of drama, because they do now and again, but at the same time they do strive to focus on the beauty that life has to bring them, and try to stay away from that which makes them feel otherwise unwell.