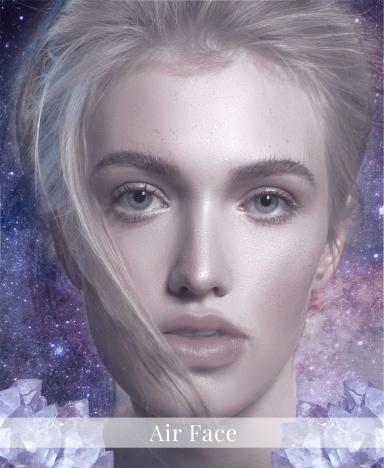 Traditionally, the element of air was missing in many of the facial reading traditions.

It isn’t part of Taoist traditions, nor is it used in Feng Shui. That being said, modern Chinese face readings often include this element because it is an important aspect of other popular practices. Western philosophies have influenced much of the air elemental beliefs.

For this reason, unlike other facial readings that only classify faces into classic shapes and features, it is said that those with certain striking features often have the influence of air in their facial features.

This means that people who have air elemental features are simply influenced by the element.

For example, a person could be a Fire Dragon, such as Reese Witherspoon. However, we can tell that she definitely has the influence of the element of air because of her trademark heart shaped face. Notice that she also has many of the other common features that are seen when they share air elements.

If You Have These Features, Chances Are That Your Element is AIR

Those with the influence of air will be known for their out-there personalities, excessive flair and sometimes exaggerated facial features. These people have features that are not always the cultural norm, yet they pull it off and seem to look cute at just about any age.

Ladies are often prized for the qualities of air. Men, on the other hand, may sometimes appear soft or effeminate in their features. This is because the features themselves are somewhat dramatic. Whether it is their sly crooked smile, constantly moving eyebrows that seem to react to every emotion that these people experience, or stray unruly eyebrows that can be a challenge for even the strictest of pluckers, their features almost always come together pleasingly.

One of the attributes that is easiest to identify as being influenced by air is the cool or sly charm that exudes from air people’s faces. This is often exaggerated if their zodiac element is also air. When done right the smile can be one of those, “come hither” seductions. However, the same cute curl of the lip on one person can also look absolutely insane on another.

Imagine a wide, thin lipped smile that is slightly too big for the face. Combine it with an angular heart shape, crazy eyebrows and the common almost anime styled eye shape and you’ve got yourself one intense individual! Because people with air influences are not always considered the traditional beauty, some of these individuals can have low self-esteemed.

Those that are unfortunately to get all of the exaggerated features will often have confidence issues. Thankfully, the nature of air is that of cool logic and often graces individuals with increased intelligence and reasoning. You can bet that those with this element on their side are able to make the best of any situation!