Aries and Aries - Compatibility in Sex, Love and Life 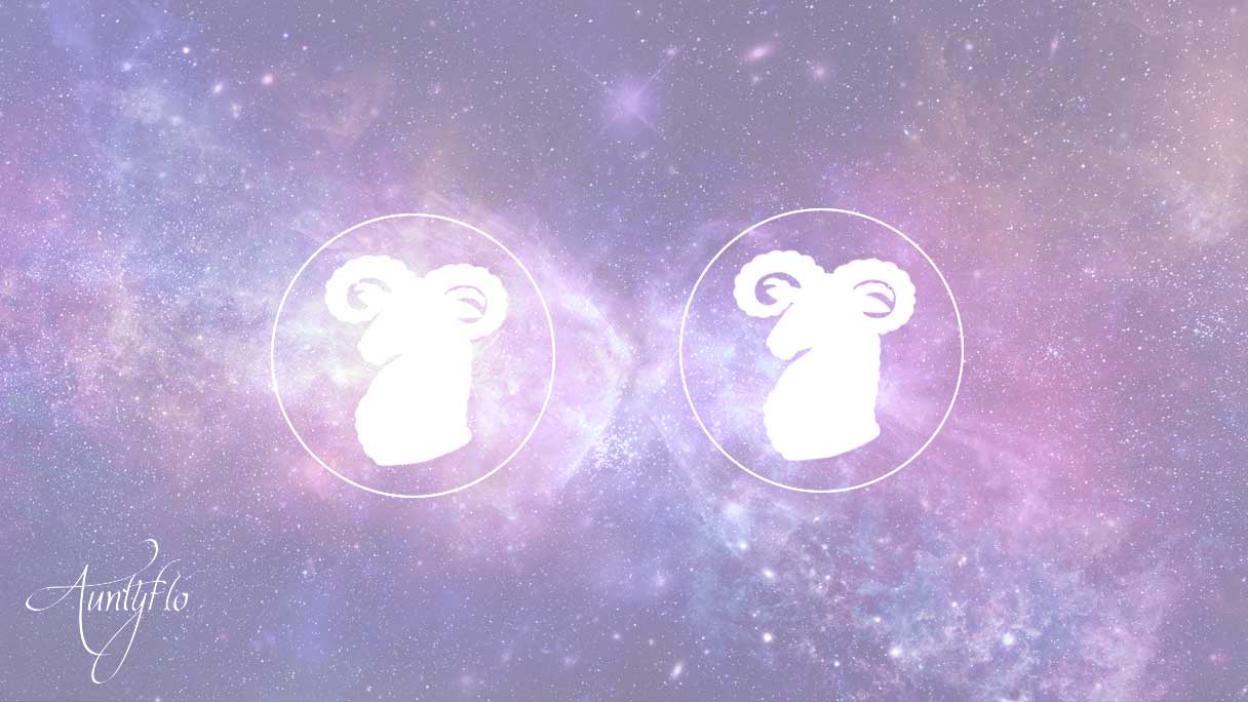 When Aries and Aries signs unite together as lovers -  it is pure fireworks.

Compatibility speaking, the heat is on! Your both fire signs so you reap passion, your bold and a tad bit controlling. There is a “massive electrical current” that charges through any problems that you may have and you two are forced together once you meet rather like magnets of the universe. We got it all in this union: devotion, happiness and of course loyalty. But will you two make it through? An Aries and Aries a match is a partnership made in heaven - but there are things you need to watch out for. Compatibility wise, the Aries and Aries duo bond together and shine like a million stars.

Aries and Aries are both Cardinal Signs

In astrology Aries is considered a cardinal sign. This triplicity is not common and there are only four signs that fall under the cardinal attribute. Click here to learn more about them. In this compatibility overview, in a nutshell, these four “cardinal” signs are strong and focused and include: Aries, Cancer, Libra and Capricorn. Aries, your sign, is also connected to the season spring and they are normally focused on winning in life.

Aries and Aries Compatibility And Dating

Dating is properly one of the most complex things to go through. If you finally met your man or woman and you wondering if your compatible then it's important to consult the zodiac when it comes to chemistry. Why I hear you ask! I always believe that gaining an understanding into the astrological connection between two people is of vital importance. You can understand each others focus and possible traits.

Aries And Aries Compatibility And Passion

Oh yes, there is heat. Why? Because of the element of “fire” in between you both. This is a fanciful union full of remarkable similarities. If you read your horoscope beware when the Uranus planet goes through Aries. When this happens the compatibility of you rocks, and both of you can feel like the partnership is like rollercoaster. It’s not uncommon to feel your relationship is going up and down, round and round and can sometimes crash! So make sure you check out my horoscopes to see if this happens. There is certainly a gust of fire between you two, this is because your signs are both pulled by Mars, the Roman God of War.

When people ask me about the two Aries signs in terms of compatibility I always say one thing.  If you think about the Ram with all the pushing and thrusting to control people into their direction in life this can imply that the relationship will be just that. The good news is that you will have massive passionate liaisons but this might be met with patterns of difficulty.

Of all the zodiac signs Aries and Aries fall into the “fire” zodiac signs and they are both also the most courageous. They are two people who trust each other indefinitely. They are not shy and would easily travel the world. We must not forget (as I have already mentioned) the ram’s horns means the Aries man and women have a fast passionate love affair and sexual compatibility to their love life. Previous lovers may also believe that these two are reckless and often are completely honest and open about their feelings.

Overview of the Aries and Aries Compatibility As a Couple

The Aries couple is what I call the most courageous of the 12 signs. They always like to demonstrate that they are in total control. The worrying aspect of this “union” is generally is the “control” of the two.  A game of scrabble may take a completely different aspect in life as you are both super competitive. Together they challenge the norm, if there is loss in life (such as a loss of job) this does not phase them and they will keep on trying - just like the Ram with his horns he keeps on when other people will give up!

Are Aries and Aries Good Together?

Together they challenge the norm, they will keep on trying - just like they run around they are also very active people and focused on exercise and sport - oh yes! this is very important to them.  They have great self-confidence, quick wit and also a great sense of humor.  The Aries man generally does not like other men talking to his Aries women this is because Mars is primarily a “fire” element so this indicates possible jealousy.

Analyzing two birth charts for compatibility is something that I just love to do. Before you erase the Aries man from your dating prospects make sure you read my key compatibility analysis below. Aries people naturally born to be focused, competitive, fiery, and also protective of their own time and space.

They love to have peace and quiet. This is fantastic because if you meet a man or woman they totally understand the dating scene. You will both be super competitive when it comes to working.

This can cause conflict but it will mostly me that you too are desirable and ultimately bounce off each other. The Aries woman will crave attention from others, additionally, they also desire devotion from the Aries partner. This union is often very intense due to the fact that both are ruled by fire - and this can cause conflict but also an extreme passion. There may be difficult finding a compromise when an argument is being faced.

Are Aries and Aries a Great Couple?

Well, to answer this question, both of you though shine so brightly. I would describe the union as two similar minds meeting in beauty. There is a funnel of hope and bags of common ground between the two of you. In fact, I would go so far to say that your partner is your Zodiac twin flame. There is a strong focus on both of you having a fair few short-term passionate affairs.

The compatibility chart that I use is based on the ancient Egyptian zodiac oracle. The overall chance of success is 97%. 100% being the most successful love combo. So yes, you two can be together!

By now, it is clear I feel these zodiac signs have strong focused personalities. One of the barriers between this successful partnership is conflict and also jealousy. From a sexual perspective, an Aries and Aries will be compatible in every way. In regards to intimacy and sexual attraction, it may be so intense that there is little emotion all feelings around the interactions. There is a focus that there could be trust issues between an Aries and Aries. They can perhaps start acting in a peculiar manner such as checking each other’s WhatsApp messages and all telephone calls. This is because of the cheesy fire element again - within both the astrological signs.

Aries and Aries As Parents

They enjoy protecting the family, their brude, and their castle from everything else in life. In terms of astrology when Mercury goes retrograde between the Aries couple - that they have to be concentrated on how they are communicating with each other. It is normally we have to be careful to become deep in different archetypes. Naturally, we all have a human drive to make a connection with others - and our attitude changes with the different aspects in life.

The Aries and Aries relationship is connected to pleasure and enjoys asserting themselves in life. How one applies the “mars” energy of the planets and how they apply their energy is in unison is important. The good thing is that their approach to parenting skills are similar.

Will Aries and Aries ever cheat?

Compatibility is really a focus of our own consciousness. Aries and Aries are known in astrology as Conjunct, this means they are the same sign. Love is connected to someone who is in the same zone - you two as lovers.

If you have truly met the love of your life but you will both enjoy the “chase” but being a bit self-centered maybe both your downfall. Like, most rams you two have a great appetite for love but your both not the types to play it safe. Instead, you like to play around with your ardor and imagination. I’m not saying that you are likely to cheat but it is a possibility. It will really depend on how difficult it will be to get through those arguments.

How Can An Aries Man Attract Aries Women?

Clever witty men are more than likely to win the heart of the Aries women. Some of the finer points of the fiery Aries women are that she is totally the queen of her own scene. If you want to jump on her stage then you need to shine. This darling cosmetic goddess is a beauty inside and out. With that little touch of Hollywood elegance. Red is her preferred color to match her fire persona - therefore some lush roses could attract her no end!

How Can An Aries Women Attract An Aries Man?

There will be certain moments the Aries woman is the only ONE that can win the heart of her equal. Remember she must stay a “conquest” for him. It is likely that she will engage in his imagination and he will then - step back and think more and more about her. Her passion is usually ignited when the Aries man shows off his passionate side. Clever and quick-witted Aries men win the heart of the fiery Aries queen, in my opinion.  Aries can be selfish (this is one of the negative qualities) so this is something that he must curb!

My Final Thoughts On Aries And Aries Compatibility

In summary, in my view, this is a fab match. There are “perfectionist” tendencies of these two sexy fire signs. It could mean the union it is a match made in heaven. Feelings do not lie. When the day outside is full of dazzling sunlight and it is a bright glorious day this is how you two will get along at the start of the relationship. However, you both have tempers and this can easily result in “temper tantrums” just like the distinct grey cloudy day. It’s up to you if you want the day to be sunny or gloomy!

There is a chance that you need to make sure you don’t stand in that “grey zone” so make sure you empathetically reach out to each other with happiness and gratitude. Blessings, Flo